The Glass Menagerie (1944) was the first successful play by Tennessee Williams and, although far from the vertiginous poetic heights of his masterpiece “A streetcar named Desire”, it contains much the same themes: the obsession with the loss of youth, family conflict, the desire to escape reality through a fantasy world and the inability to live in the real world.

Director and designer Tom Cairns makes a compellingly stylish job of this “memory play”. While the veneered art deco sofa anchors the story to its original 1930s setting, most of the other set elements and the costumes blur into a “timeless modern” aesthetic, functional to the representation of the cloudiness of memory. Likewise the continuously rotating cubic structure that encloses the scenes around the rowdy dinner table represents the shifting of memories.

Samantha Bond is Amanda Wingfield, the oppressive mother. Her talent is a comic one, and she’s at her most convincing when she wants to make us laugh, as well as infusing even serious scenes with a vein of comedy. Her scene with the gentleman caller on the sofa, where she feigns loquacious nonchalance, is a highlight of the show. Zara Devlin plays well the frail and sweet Laura, the crippled daughter whose favourite pastime is playing with the eponymous glass menagerie. Frank Blake is Jim O’Connor, the unaware “gentleman caller” that cannot fulfil the role of rescuer of Laura’s solitary fate because of his latent homosexuality. Marty Rea shines playing the somewhat unripe character of the unfulfilled Tom, displaying many flashes of that naturalness typical of the great actors.

This production represents what the perfect staging of a classic can (should?) look like in the twenty first century. You can skip the philological period costumes and settings, but you do it subtly, with little, almost imperceptible twists, in a way that appeals and speaks to contemporary audiences but doesn’t betray the text, nor trivialises it; it emphasises it instead. 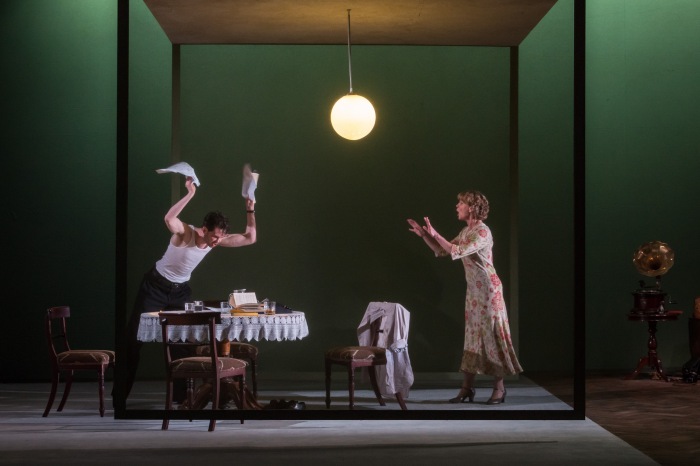 Every year the Royal Irish Academy of Music (RIAM) can be trusted to pick delightful if little known or little performed operas that span the whole four centuries of opera’s history up to new or newly commissioned work to showcase the achievements of their students. The evident double draw of these events is the discovery of both new talent and ‘new’ operas.

This was the round of La liberazione di Ruggiero dall’isola di Alcina (1625), the first known opera to have been written by a woman, the Medici court musician Francesca Caccini. What stands out listening to this work for the first time is the discovery of another of the many semi-hidden gems that opera history keeps giving us. Within a musical style that is very reminiscent of Monteverdi (the so called ‘stile moderno’), Caccini has her own voice, weaving beautiful melodies, incisive recitatives and seductive ‘canzonette’, as alluring as her “Siren’s song”. The most interesting historical fact, to me, is that this is the first opera – of the many more to come – whose plot is taken from the Italian epic poem Orlando Furioso (1516-1532), the masterpiece of Ludovico Ariosto.

The reason why the episode of the sorceress Alcina and the knight Ruggiero has had endless appeal throughout the centuries has to be found in the perfect metaphor that the story provides for the common but, at the same time, mysterious experience of being in love: falling in (and out of) love is exactly like falling under (and out) of a magic spell. The exact same object of veneration can become, in a moment, source of contempt (“No more I burn of love, I burn with disdain”; “Annoying to my eyes more than death” says Ruggiero of Alcina).

Director Hélène Montague – with the students of The Lir National Academy of Dramatic Art for the set, costumes, lighting and make-up – put together a playfully modern version of the story with success. David Adams (at the harpsichord) conducted the students playing baroque instruments in an adaptation of the score, with the recorder solo of Daire O’Connell underlying nicely the ‘honeymoon’ phase of Ruggiero and Alcina. The singers generally rose to the challenge of baroque opera: if baroque style does not particularly strain the voice, it places an emphasis on the meaningful pronunciation of single words in the many recitatives.

Soprano Clodagh Kinsella was well cast as the beautiful Alcina, while Dylan Rooney displayed a promising baritone voice as Ruggiero. The authoritative role of Melissa would have ideally been taken by a contralto, but mezzo-soprano Aebh Kelly played her part well, especially in the scene where she brought Ruggiero ‘back to business’ from his enchanted state. To be noted, and contrary to what happens in opera in later centuries, that the ‘good woman’ (Melissa) is given here the low vocal range, while the evil sorceress is a soprano. Notwithstanding the explicit moralistic conclusion of the opera, which warns against the dangers of not controlling one’s own passions, for the whole opera it’s evil and error that have the sweetest sound (Alcina, the Siren).

A plethora of secondary roles left a strong impression, starting from Alcina’s Damsels and, in particular, soprano Caroline Behan. Megan O’Neill sang beautifully the most memorable aria of the opera, the – literally! – enchanting Siren’s song “Chi nel fior di giovinezza” (“Who, in the flower of youth”). Soprano Breffni Fitzpatrick was assured in the role of the Messenger, handling the recitatives very well both for phrasing and Italian pronunciation. Ava Dodd as the Formerly Enchanted Lady towards the end closed the opera with impact, together with the strong final chorus. Tenor Vladimir Sima, finally, was very expressive in the role of the Shepherd, showing an excellent control of the singing and superior ease with the Italian.

Extract of review published on Bachtrack.com on 17/3/19.

Of all operas, Orfeo ed Euridice is perhaps the one for which a minimalist modern reading makes the most sense. Robert Carsen’s direction takes Gluck’s reform towards simplification of opera to the next level by focusing on the essence of the work. If Gluck had wanted to dispense with convoluted plots and auto-referential vocal virtuosity to focus on the drama on stage, Carsen decides to keep only what he deems to be the fundamental elements of the libretto. Moreover, with its centring on the universal and all-embracing themes of Love and Death, Orfeo ed Euridice is a pure distillation of… (continue reading on Bachtrack.com)

Extract of review published on Bachtrack.com on 25/11/18.

What is left of Verdi’s Aida if you remove the pyramids, statues, temples and thrones? A modern take on this distinctively historical opera can look like an oxymoron and put off more conservatively-minded operagoers from attending the show. But don’t make that mistake. In presenting the last – and the most ambitious – of Irish National Opera’s productions for their first year, director Michael Barker-Caven cleverly strips the opera bare of its monumental fringes and aims at showing the “ghost in the shell” of Aida. While the intrinsically symbolic value of art… (continue reading on Bachtrack.com)

Extract of my review published on Bachtrack.com on 23/10/18.

If you happened to listen to Mercadante’s Il bravo blindly, you could almost swear you were listening to some unknown Verdi opera; except that Verdi’s first opera, Oberto, was only going to appear eight months later, while this was already Mercadante’s 44th opera! This is the sixth of the canon to be rediscovered at Wexford Festival Opera over the past twenty years, and one can easily understand why this is.

Extract of my review published on Bachtrack.com on 22/10/18.

Dinner at Eight, William Bolcom and librettist Mark Campbell’s 2017 opera, had its European première at Wexford Festival Opera on Saturday under conductor David Agler. The opera is based on the 1932 play by George S Kaufman and Edna Ferber, in turn adapted into a movie by George Cukor (1933). Set in American Depression New York, Millicent Jordan (Mary Dunleavy) is organising a society dinner for a couple from the English aristocracy… (continue reading on Bachtrack.com).

Extract of review published on Bachtrack.com on 15/10/18.

Béla Bartók’s Bluebeard’s Castle takes its inspiration from Charles Perrault’s fairytale; but while the original resembles more closely an actual horror story, with various potential moral interpretations (the atavic punishment of female curiosity and transgression, the discovery of truth and the loss of innocence, etc.), the opera navigates a more subtle and symbolic ground. It is this fundamental difference that director Enda Walsh seems to bypass in this production for Irish National Opera… (continue reading on Bachtrack.com).